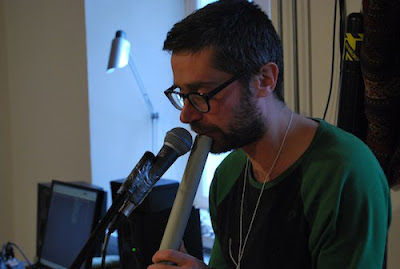 Since 2003 Sergei Kleyn, a poet/writer/performer/composer from Odessa, Ukraine, has been the driving force behind the international community of musicians known as Ukr.tele.kom. The main issues on their agenda have been: sound exchange via various mediums (internet, snail-mail, "gypsy mail"), composing pieces together as well as improvising spontaneously in different locations all over Europe. This network consists of over 70 musicians/improvisers worldwide and has released records via net-labels and samizdat labels, including their own SAMOPAL RECORDS. Additionally, various line-ups have toured in Germany, France and Croatia extensively since 2004. Much of the network's activity has also happened in Ukraine - mainly Odessa and Kiev.

Another important part of Ukr.tele.com, dubbed "m'lah (messenger)" has been giving the voice to people otherwise not identified as musicians and to sounds they make. Included in this company have been homeless children from Ukrainian shelters, strret singers, town madmen, marketplace drunkards etc. These recordings have been featured in concerts as samples on also have appeared on records by UTK. But most importantly, this underlines the point that YOU ARE Ukr.tele.kom.

In his workshop on the 25th of April, issues on the agenda will be: using studio as means of composition/improvisation; echo; creation of ambiences; natural acoustic environments; freeware as tools to aid sound/art; and various others.

Be prepared to take part in collective composition/improv, because, after all, YOU ARE Ukr.tele.kom if you are there. Period.

helikoosolek:tartu is a regular gathering for the exploration of sound in all forms.  The meetings comprise presentations, concerts, workshops, discussions, and field trips pertaining to sound and its consideration in art, music, architecture, ecology, philosophy, social and cultural interaction, and any other context that presents itself. Participants are encouraged to propose activities or discussions on topics of their interest, or to present projects of their own for feedback. Sessions take place on the last Wednesday of each month, from 6-8pm at the Eesti Rahva Muuseum.