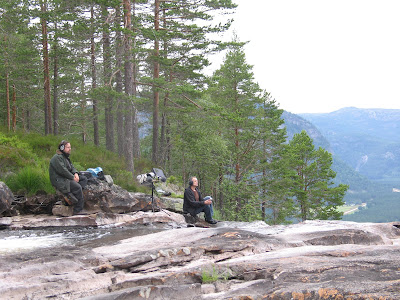 Less talking and more listening this week, as helikoosolek organiser Patrick McGinley selects a playlist of sound and video featuring field recording, acoustic experimentation, spatial exploration, and composition. McGinley will delve into the collection of sounds that have come his way as the purveyor for over 10 years of framework radio, and that have come to his attention through the worldwide network of sound artists of which he has been a part for just as long. We will explore durational listening and how it affects perception, and discuss and describe our experiences of non-musical listening.

Likewise, participants are able and encouraged to bring along their favorite non-musical recording to share with the group, as an experiment with the first "open-mic" segment of helikoosolek.

Patrick McGinley is an American-born sound, performance, and radio artist based in Europe since 1996. In 2002 he founded framework, an organisation that produces a weekly field recording-themed radio show, broad- and podcasting around the world. In 2005, he began working closely with the artist-run organisation MoKS in southeast Estonia, relocating there permanently in 2009. Most recently McGinley has been giving presentations, workshops, and performances based on the exploration of site-specific sound and sound as definition of space. McGinley's work is about small discoveries and concentrated attention; it focuses on the framing of sounds around us which normally pass through our ears unnoticed and unremarked, but which out of context become unrecognisable, alien and extraordinary: crackling charcoal, a squeaking escalator, a buzzing insect, or one's own breath. He works equally with spaces, objects, resonances, and people, in composition, performance, or simply collective action and experience, in exploration of perception via attentive listening.